The compromise between the Parliament and the Council: raising the bar for Erasmus+

The negotiators of the European Parliament and the German Presidency reached a compromise agreement on the long-term EU Budget on November 10. According to Council sources, this compromise, among other things, helped secure a targeted reinforcement of EU priority programmes by €16 billion through additional means (€12.5 billion), reallocations (€2.5 billion) and more flexibility (€1 billion). The good news is that the Erasmus+ programme will receive additional funding for €2.2 billion, thus increasing its budget from the July agreement by the equivalent of an additional year of financing. This is expected to bring the budget close to the initial Commission’ proposal. Other important programmes to benefit from this deal are, notably, EU4Health, Horizon Europe, Rights & Values and Creative Europe.

With this compromise, the Erasmus+ is today the programme with the largest and most meaningful increase in its funding in the next programme cycle, an increase that vouches for its importance. This also testifies of the Parliament’s priority to ensure that the EU flagship programmes are able to uphold the ambition of EU’s political commitments such as the Green Deal, the Digital Education Action Plan, the European Education Area, and the Skills Agenda. 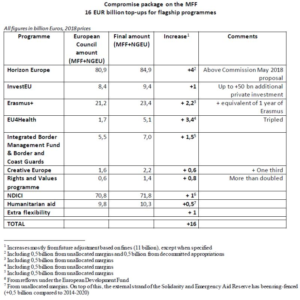 As LLLP, we were involved in the front line with advocacy efforts around the Multiannual Financial Framework and this renewed ambition represents in our eyes a very welcomed U-turn on the summer cuts. A positive development, where civil society’s concerns were heard. At the same time, we are aware that the budget for education and training does not yet match the needs of learners and educators across the continent. We were promised a tripled budget and this welcomed compromise means slightly more than a 50% increase. Because of this, LLLP will keep on reinforcing its actions to prompt Member States to move away from the worrisome trends of thinner and thinner lines for education and training. But make no mistake: the compromise is a step in the right direction and, above all, a political message that education, training and lifelong learning are important means towards sustainable recovery.

So, what’s next for the EU Budget? The compromise agreement will have to be formally adopted by the EU Council and the EU Parliament, each with their own procedures. The negotiation will now focus on budget allocation within different sectors and initiatives in the 2018 Erasmus+ proposal. In the Council, for the time being, Poland and Hungary have expressed their distaste for the compromise. The two countries are said to have vetoed the compromise by opposing the clause that makes access to EU funds conditional on adherence to the rule of law (and both countries have an open procedure for breaching it). This bitter disagreement implies that the EU is far from reaching a stable agreement on its long-term budget, but the political understanding behind the compromise sparkles some lights on the whole process in an otherwise grim autumn. We will continue supporting the European Parliament’ position to secure key sectors’ funding first.