For its 4th edition, LLLP welcomes applications on the topic “Learning democracy, values and participation“. This broad theme is declined in the activities and the categories for the awards. The aim of the LLLAwards, in fact, is to recognise and award three initiatives in three different categories, as follows:

Here below the Jury of the 2019 edition 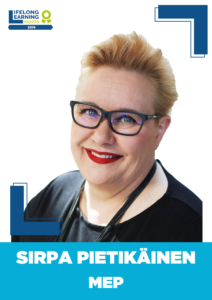 Sirpa Pietikäinen is a Finnish Member of the European Parliament representing European People’s Party (EPP) since 2008, and a former Minister of the Environment of Finland. She is a Member of the Committees on Economic and Monetary Affairs (ECON) and Women’s Rights and Gender Equality (FEMM), and substitute member on the Environment and Public Health (ENVI). Within her work, she seeks to combine her two specialities, that of the environment and economics. Since 2015, Sirpa Pietikäinen is the chair of the Lifelong Learning Interest Group of the European Parliament. 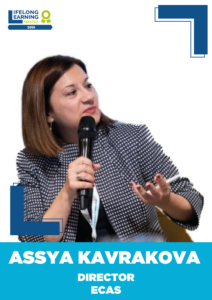 Assya Kavrakova is the Executive Director of the European Citizen Action Service (ECAS) an international non-profit organization, based in Brussels, with a pan-European membership and 28 years of experience in EU citizens’ rights enforcement and civic participation in the EU decision-making process. She is also a member of the Stakeholder group of the REFIT Platform for Better Regulation and the project manager of the online collaborative platform “European Citizens’ Initiative Forum”. Ms Kavrakova has more than twenty years of experience in senior management positions in the non-governmental sector and in-depth knowledge of European Citizenship, European Rights Framework, EU civic participation formal and informal mechanisms, and EU Funding Rules and Procedures. She has co-authored study ‘Societies outside Metropolises: the role of civil society organisations in facing populism’ commissioned by the Diversity Europe Group of the EESC. 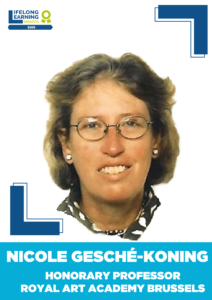 Nicole Gesché-Koning is an Honorary Professor at the Royal Art Academy Brussels. She holds an MA Arts in Arts in History of Art and Archaeology (1972), MA in Social Sciences/Anthropology (1973). She has worked as associate professor in the Université francophone Senghor in Alexandria (Egypt). Freelance journalist for the quarterly heritage magazine Les Nouvelles du Patrimoine, she chaired the sub-commission on Culture and Heritage of the Commission belge francophone et germanophone for UNESCO. First honorary member of the Committee for Education and Cultural Action (CECA) of the International Council of Museums (ICOM) – Secretary and Chair of the committee (1992-1998) and editor of the magazine ICOM Education (1987-2007). She authored the Research for the CULT Committee Education in Cultural Heritage for the European Parliament (2018) 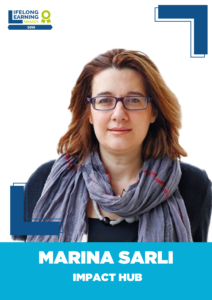 Marina Sarli was the first Italian young volunteer to join the pilot action of the long-term mobility program European Voluntary Service in the late 90’s. Since then, she has been working as project manager and general director for Youth and Development Organisations in Europe. In 2004, she founded Fair Trade Hellas, one of the first social enterprises in Greece. For the last 10 years, she has been active in consultancy, project design, advocacy and governance in the European Development Cooperation Sector, where she has served for 6 years as International Board Member of Concord Europe, and has worked as a consultant and trainer on strategy, advocacy and policy areas. Since 2016, she has been working for Impact Hub Company as EU Cluster Coordinator and Project Manager, coordinating multi-partnership European programmes. She is currently covering also the position of Advocacy Pillar Coordinator of the DEAR project Snapshots from the Borders on migration, led by Lampedusa Municipality. 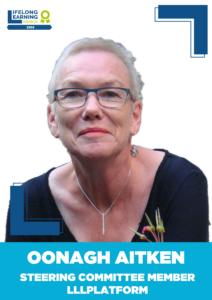 Oonagh Aitken has been chief executive of Volunteering Matters for seven years. She has led Volunteering Matters through a name change – it was formerly Community Service Volunteers – and a refocus on its volunteering and social action work, the charity said. Ms Aitken previously worked for Glasgow City Council and Fife Council, and started her career in teaching. She is also president of the international network Volonteurope, and is on the boards of the European social justice group Solidar, the European Civic Forum and Civil Society Europe. As of June 2019, she is also member of the Steering Committee of the Lifelong Learning Platform.

See all Past LLLWeek 2019 – LLLAwards